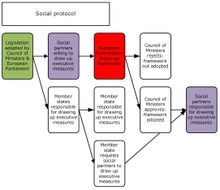 Proposals on the following topics will be made in accordance to the ordinary legislative procedure:

The European Economic and Social Committee (EESC), the Committee of the Region (CoR) and the social partners are consulted.

Proposals relating to the following areas will be made in accordance to one of the special legislative procedures:

The Council of Ministers, by unanimity, decides, on the proposal after consulting the European Parliament, the EESC, the CoR and the social partners.

For almost all of the above names policy areas the EU only has competence to adopt legislation that encourages cooperation and the exchange of information between member states, or establish minimum requirements for the implementation of legislation in the above mentioned areas. To combat social exclusion and to modernise social protection systems, the EU may only provide proposals for improving cooperation between member states.

There are two ways in which social partners can be involved in the elaboration of the proposed legislation:

In the second case, when dealing at the European level, an agreement is drawn up by the social partners. That agreement is submitted to the Council by the Commission. The Council decides, according to the voting procedure described in step 1. The European Parliament is informed on the decision made.

Application of the social protocol

This procedure is only used only for subjects mentioned above. In all other areas where social partners play a role, their involvement does not go beyond an advisory role.