Delegated acts are generally used to establish measures of a technical nature. Specialist knowledge is usually required to draw up such measures. Despite the fact delegated acts focus on technical measures, such measures may have significant impact in the member states. As such, the seemingly politically less important delegated acts can still attract political attention. When secondary legislation is limited to establishing uniform European measures for implementing primary legislation implementing acts are used instead. 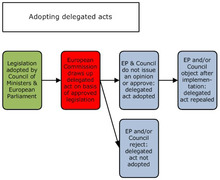 Procedure for delegated acts in detail

Primary legislation establishes the framework and the boundaries in which the European Commission can draft further measures. The role of the Council of Ministers and the European Parliament is also established.

In some cases the mandate of the Commission is limited in time by a so-called sunset clause. When the mandate expires it can be extended, become subject to review or be terminated.

The Commission drafts a proposal for a delegated act. This process involves consultations of experts from the member states. Such expert comittees - known as comitology - are made of member state appointed experts, almost always civil servants. In (rare) cases when the Commission does not require additional expertise no consultations are held.

After the Commission has issued a proposal for a delegated act there are three possible outcomes:

Both Council and EP are required to provide a motivation when objecting.

Both Council and EP have two months to conclude their evaluation of a proposed delegated act.

The Council of Ministers decides by qualified majority vote i. The European Parliament decides by

majority of its members i.

In cases where the European Parliament is not co-legislator when establishing the primary legislation the EP generally does have a say in the procedure for delegated acts.

The Commission may only issue delegated acts when the following conditions are met:

As long as the following conditions are met any piece of primary legislation can include a mandate for delegated acts.

Delegated acts are based on the Treaty on the functioning of the European Union: